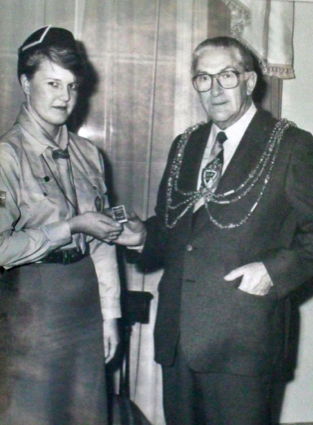 As a child of the 60s & 70s, my initial contact with uniformed groups was through Brownies and Guides, with a dalliance in the Scouts in the late 1970s. Venture Scouts were very progressive in those days and began to recruit girls so not wishing to be left out I joined 5th Hove along with some school friends.

By the time I was too old to be a Venture Scout, around 20, I was persuaded to help run one of the Cub Packs with a couple of the other Venture Scouts, eventually becoming Akela for 5th Hove Apache Cubs in 1981–84. Also at this time I started dating my future husband who had just joined the Army but gone through Sea Cadets as a teenager. His father was the CO at Brighton Sea Cadets and suggested I join his leadership team as well to assist with their new female teenage recruits. He encouraged me to use my leadership training with Scouting and other activities at Sea Cadets together with personal fitness groups I attended to complete my Gold Duke of Edinburgh’s Award.

I loved these few years in my late teens and early twenties, always busy with full time work in a Building Society and evenings and weekends spent helping at one group or another. I finally achieved my Gold Award at the end of 1983 and received it at St James’ Palace in March 1984.

I was married in June 1984 and left the UK as my husband was then serving in West Germany – Dusseldorf. However, I joined the local Cub Scout Pack for children of Army serving personnel in the area for the year or so we were based there.

On returning to the UK in 1985 we settled in Hampshire for the last few years of my husband’s Army career and I concentrated on my career with a Life Insurance Company and further Business Studies. I had our daughter in 1989 and we moved back to the south coast around 1993 settling in Newhaven. I transferred into a bank for my work but never really liked it. I finally left in the summer of 1994 when I had our son.

Life after that was full of ups and downs with the children growing up and I embarked on some further education around 1999, including a part time degree course in Cultural Studies, taking 6 years to complete. We also moved home a couple of times and the children and I finally settled in Hove again only 2 streets away from where I grew up. Following my graduation at the ripe old age of 46 and after a short illness from 2007–09 I got a new job at a local children’s safety charity where I am now Office Manager. Growing up, my daughter also loved Rainbows, Brownies and Guides but my son only showed an interest in the ATC when a friend took him along to 176 Hove Sqn.

I was also so impressed with the work of 176 Hove Sqn I offered to help and came on board as a CI back in 2010. With my background in Scouting and Sea Cadets and having achieved my Gold DofE too, I was glad to be part of a team helping the cadets succeed at all the activities available through the ATC and make their teenage years in the ATC an enjoyable one.

Initially I oversaw the running of their ‘canteen’ ensuring there’s plenty of energy producing snacks and drinks for their break times. Getting some of the cadets involved with this too has covered a few Volunteering Sections for their Duke of Edinburgh’s Awards. The canteen runs well enough to turn a small profit which ensures the cadets enjoy a pizza filled Christmas party and Easter Eggs for everyone too. Some were also involved with the development of the memorial garden along the back of the Sqn fence line. This too covered their Volunteering role for their DofE Awards.

The CO reviews staff job roles periodically depending on staffing levels and skills sets so having done a few years as DofE officer – mainly admin for the scheme – I now have the unenviable task of checking H&S compliance at the Sqn! I still oversee the ‘canteen’ – I guess no one else really wants to make the tea!

Life is busy for all the adult leaders at 176 but whether we volunteer for the 2 parade nights, additional weekend activities or just one night a week we’re all there to ensure these teenagers thrive and achieve with opportunities they might otherwise not get. As the slogan for Tesco declares – Every Little Helps!! Lately it’s been great to see cadets progress through the Sqn and return as adult leaders, whether as CIs or in uniform.